CONTEMPORARY PORTRAITS: IN SEARCH OF THE SACRED


Would the Bible have been as meaningful to Western culture, if someone, somehow, had lost a few letters (characters), here and there, before it got to us?


If it were edited -- pruned -- along the lines of "less is more." Would that make the Bible even better? More essential? More profound?

My answer is: Every letter, every word, every chapter counts. And contributes meaningfully.

All of us are characters in the book of life. And frankly, I think our world would be poorer without you.

Whoever you are. You are essential to this moment. To this conversation. You are, in a word, sacred.

And that's what I'm trying to capture when I paint a portrait these days. Yes, I want the portrait to resemble the person portrayed.


I also want the image to feel as special, as essential as the person I have the privilege of painting.


In the words of the Man from Mars, "Thou art God." (Stranger in a Strange Land, Robt. Heinlein)

Can you grok it?


Copyright 2020 All Rights Reserved. Images and photographs by the author, with the exception of St. Gregoary the Great.

Posted by gmichaels at 5:56 PM No comments:

Images by and Remembrance of Artist William Girard of Royal Oak, MI

So what would you call a really, sweet, personable guy who devoted most of his life and all of his adult life, to playing with mud? A guy  would tell you to your face - with great conviction - that the design and color of mud really, really mattered?

Me? I called William Girard, aka Bill – former professor of art at the Center for Creative Studies in downtown Detroit (now the College of Creative Studies) and fine artist – my dearest friend, aside from my wife. I called him my mentor. I referred to him as my “other” father.

He was the single man in my life I most wished to emulate. He was my exemplar of artistic integrity, decency and humility.

Initially, of course, I just called him “professor.” Then “Bill.” Then, as I came to know his work better, I told others he was “amazing.” For a long time I referred to Bill as a minor master. (That was when I was young and stupid.)

Allen Abramson, Bill’s friend, patron, dealer, obsessive collector and life-long irritant, once arranged a show for Bill in the Big Apple through the auspices, I believe, of a wealthy, well-connected friend.

At the opening, Bill apparently found the company of the wealthy, high-fallutin’ collectors in attendance difficult to cope with. So, he repaired to the refreshment table. There he ran into an older couple helping themselves to copious servings of whatever.

Anyway, the nice couple told him that they really didn’t come to galleries to look at art. They said that they really came for the free food and drinks. Shades of Great Gatsby! Bill decided that the New York art scene just wasn’t for him.

There were always people who wanted what he made. The aforementioned Allen left of collection of hundreds of pieces. Many quite marvelous. He lied, cajoled and argued to get his hands on pieces Bill promised to others. It seems sort of funny now. It wasn’t so funny then.
So, with no real need to show in galleries, and a local critical aristocracy more attuned to the fashion of art than the great throbbing power it could deliver, Girard sort of vanished. Actually, he just never showed up to begin with.

Today, sculptor and painter Bill Girard remains completely unrecognized. His work is unknown by critics with any clout. How could it be otherwise?

Bill rarely took photos of his work or kept track of who bought it. He didn’t need them. His visual memory was darn near perfect. (He had perfect pitch, too.)

The up-side of all this is that young art addicts like yours truly had direct access to one of the most wonderful artistic resources, and one of the nicest, in the entire city of Detroit.

Because Bill generally side-stepped upwardly mobile and already rich collectors, aspiring artists and little people like me had a chance to drink from the richest spring of genuine artistic insight and accomplishment imaginable. Because others with much valued Bill so little, those of us with very little could afford a few Bill Girards of our own.

No question, Bill was a “flawed vessel.” All of us are. Chipped here. Cracked there. Off kilter, maybe. A little lopsided. But what made the vessel called Bill Girard, born in the home of mass-production, so extraordinarily special was the intoxicating spirit that filled it to the brim.
Robert Henri called it “the art spirit.”

In Bill’s case that spirit was so very refined, so remarkably pure that it proved virtually invisible to all but a few. In fact, a spirit of such high quality is so incredibly rare that many – most Detroiters – who claimed some expertise as connoisseurs never noticed it, even when it stood right before their eyes.

Since Bill hated to travel and spent his entire working life in metro Detroit, it stood before their eyes over more than 50 years of professional activity.


I’m an unrepentant art addict. So I've stood in awe in many art museums. The little Titian in St. Louis is stupendous. The really small Giorgione in San Diego is stunning. I can’t tell you how much I love Pontormo’s murals in Santa Felicta. And Freud. And Kollwitz.


But I’m from a gritty, stinky, dirty, ugly and screwed up metropolis with a funky beauty all its own. Detroit.

As I see it, that metropolis gave birth and sheltered one of the finest artists I’ve had the good fortune to know. The problem is that  Detroit doesn’t know it.

God’s honor, Girard’s work is the most extraordinarily addictive stuff I have ever encountered.

As is obvious, I never recovered.

And I promise you, I’m not alone in this.

Until you’ve viewed a comprehensive collection of the work of William Girard first-hand, paintings, sculpture and drawing, large and small, you simply can’t imagine how dazzlingly imaginative, how very, very special, Girard really was.  And the truth is, very, very people have had that opportunity.

The best I can offer is this unprofessional website with a collection Girard artwork:

The vessel called Bill Girard is gone. But I'm still tipsy. Bill's powerful and infectious spirit gives me joy every day. Based on the emails I receive from folks who have discovered Bill Girard for themselves, I suspect it will retain its singular power for as long as beauty, craftsmanship, wit and artistic courage are cherished.

* Most images courtesy of Ken Weikal, Farmington Hills, Michigan
Posted by gmichaels at 6:48 PM No comments:

NOTHING CLEANS THE MENTAL PALATE LIKE A TASTE OF ART


Not your thing? Well at least it doesn't bite or smell or leave an unpleasant aftertaste. (Not usually, anyway.)


What's more, art can surprise you when you least expect it. I know. Here's how.

Don't believe me? Look at this.


Now look at the image in the red box from a different angle. 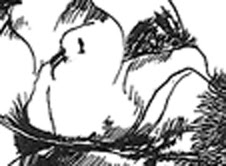 Some magicians pull rabbits out of hats. Baskin preferred birds.

Is your palate feeling refreshed?
Posted by gmichaels at 9:40 PM No comments:

One writer's small effort to rehabilitate

the reputation of failure.

Sponsored by the award-winning commercial design specialists of NM Interiors Group at www.nminteriors.biz. 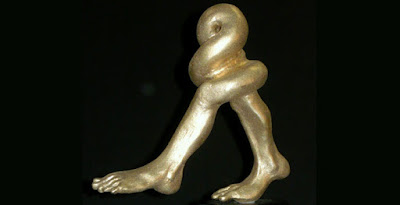 I recently encountered a LinkedIn post, entitled, How To Use Failure To Your Advantage by Dr. Travis Bradberry. He is the award-winning co-author of the bestseller, Emotional Intelligence 2.0.

The suggested techniques make sense for anyone who thinks failure is an infinitely shameful experience. But is it? Does it have to be shameful and embarrassing?

Failure - when experienced as a potent form of negative feedback - can be accompanied by significant emotional distress and self-generated or externally-prompted behavioral modification. It may take the form of avoidance behavior and self-inflicted punishment, corporeal or emotional.

After an encounter with failure, some decide that they are stupid, worthless and deserve to suffer. Such an outcome can do profound harm to one's quality of life.

Perhaps failure and the negative impulses it prompts deserve reconsideration.

There may not be single or simple definition. But its connotation is easier to sum up. Failure is unacceptable. It is useless.

Who would want to be labelled a failure or associated with one? The fact that it is so damned constricting makes it especially soul-killing and ego damaging.

But suppose that failure were not unacceptable. Say you suddenly realized that someone had slapped the wrong label on that thing or act. The wrong label!  (According to the newspaper, human beings make mistakes daily.)

So what happens when you detach the failure label? The cooties disappear.

Now failure looks more like an error. Heck, it might even prove a roaring success. Isn't that what happened when Norma Jean Mortenson was relabeled Marilyn Monroe?

In this paradigm, failure error is not the end. It is a starting point. It signals that there is something to be learned, a breakthrough waiting to be discovered. What was once apparently irredeemable and useless now signals profound value. Errors can be corrected.

Like the very best teachers, failure error encourages us to move forward. It challenges us and opens our eyes to opportunities we were unaware of. The more open we are to failure error, the faster we can grow.

So is failure error the same thing as a challenge? Certainly failure error proved a plenty big challenge for me. When I finally reversed one of my first major failures errors, I gleaned a life-changing lesson.

Once I could do that thing I hadn't been able to do before, it seemed that no one cared how long it had taken me or how often I had failed erred. All that mattered was that I could and that I wanted to.

Overcoming challenges is what human beings were designed to do, given that human existence is chock full of challenges. There is, of course, something to be said for picking your challenges wisely. But wisely chosen or not, failure error is an essential and often undervalued educational aid.

Respect each failure error for the value it delivers. Address it, then release it. Do not dally.

There are always new and better failures errors dead ahead.


Posted by gmichaels at 4:09 PM No comments: