MEET MY DAEMON OF THE HUMAN CONDITION

Sponsored by the award-winning commercial design specialists of NM Interiors Group at www.nminteriors.biz. 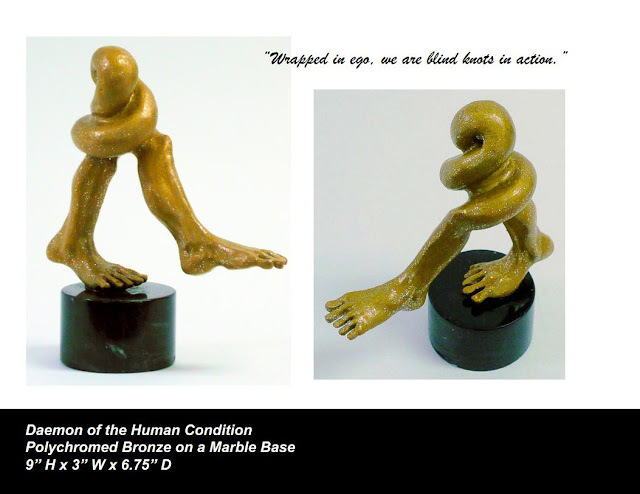 This piece - painted bronze on a marble base - was recently published in American Art Collector 2013, by Alcove Books. It also appeared in a Herberger Theater (Phoenix, Arizona) exhibit that opened almost exactly a year ago.

This is more or less how I feel most of the time. Don't tell me you haven't occasionally felt something like this yourself. No? Lucky you.

By the way, I would humbly like to offer a plug for the Lyric Opera Theatre (of Arizona State University). Norma and I attended a performance of Bat Boy: The Musical, last night.

No, I'd never heard of it either. And no, Batman never made an appearance. But we did see a lot of terrific, engaging musical theater complete with dance routines performed by skilled young performers who are likely to be part of the mainstream performing arts community in a very short time. We saw charisma happen - and what a charge that is! We saw heart. And creativity.

Ok, initially the loudspeakers were a bit too loud. But someone caught on and corrected that.

If you happen to decide to investigate its offerings yourself, I'll be the guy with the sketchbook,  trying to be an unobtrusive as possible. It didn't work last night. Someone sitting one row above me just had to tell how much fun it was to watch me draw.

I've never been able to overcome the anxiety and upset I felt, 30 some years ago, when a woman who had observed me sketching at the Detroit Institute of Arts, told me my drawing was all wrong!

Posted by gmichaels at 7:04 PM